RTAPG materials as developed by the RT consortium consist mainly of the following key elements: 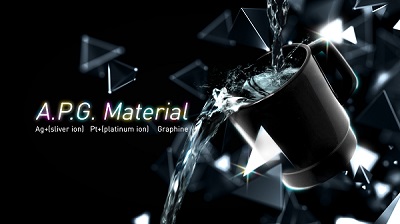 Silver is a chemical element with an atomic number of 47 and is a soft, white-gloss transition metal. Of all metals, silver has the highest electrical conductivity, thermal conductivity and reflectivity.

Silver is one of the metals discovered in ancient times because of its low activity, so that its elemental form is easily discovered and extracted. In ancient China and the West, it has long been identified as one of the five metals, second only to gold in the seven metals of alchemy.

Silver ions can target certain life forms such as bacteria, viruses, algae, and fungi. Matter such as molecules of oxygen, sulfur, and nitrogen, which are breathed through the latter, can combine with silver ions to form strong bonds to cause suffocation and death. On the other hand, outside the human body silver is completely harmless, its bactericidal effect being applicable to microorganisms. For example, in gels and bandages, we find ample use of silver.

Platinum is a chemical element with the symbol Pt and atomic number 78. It is a naturally occurring white precious transition metal, with high density, high ductility and low reactivity.

The history of human use of platinum can be traced back to ancient Egypt. Archaeologists first found in 1200 BC trace amounts of platinum in ancient Egyptian tombs and the hieroglyphics that used gold.

Platinum is a very inert metal that is extremely resistant to corrosion even at high temperatures. It is a corrosion-resistant metal and the strongest catalyst, including applications in catalytic converters, laboratory equipment, electrical contacts and electrodes, resistance thermometers, dental equipment and jewelry. Some platinum- containing compounds such as cisplatin are currently used in the treatment of certain cancers. It is effective in treating certain tumors.

Graphene is a kind of honeycomb crystal composed of carbon atoms and sp2 hybrid orbital.

The structure of graphene is very stable, and the connection between internal carbon atoms is very flexible. With excellent electrical conductivity and light transmission property, graphene is also an excellent heat dissipation material, and has functions of far infrared ray and splitting large water molecules into smaller ones.

The surface of graphene material has an active functional group, thereby greatly increasing the material cell and bioactive activity, while graphene can also act as a neural interface electrode without changing or ruining performance, such as the formation of signal strength.

Together with the added functions of far infrared and splitting into small water molecules in graphene, they help the human body towards absorption of water and nutrition.

Therefore, once RTAPG materials are added to daily necessities, they make the products work well in sterilization and antibacterial situations, thereby giving us peace of mind.

Small cluster of water molecules are high-permeability, high-diffusion, high-solubility, high-oxygen, and weak-alkaline living water. They have the following characteristics:

It is difficult to get in and out of the cell membrane by measuring the half width of water with a width of 110-130 Hz from the macromolecular mass of tap water. The water composed of 6 water molecules less than 100 Hz is referred to as small molecule water in combination with the cell membrane water channel diameter. The picky eaters only drink small cluster of water molecules. Low-lying water has antioxidant capacity, and in low-lying water environment, the activity of antioxidant enzymes in human brain and liver is significantly improved.

What is far infrared ray?

“Far Infrared Ray” has been discovered as long as 180 years ago. In recent years, it has been successfully used by scientists in human life. It is an electromagnetic wave with a wavelength of 4 to 1000 microns (µm), which is invisible to the naked eye. As part of sunlight , Far Infrared Ray is the magical energy that gave birth to the growth of the universe, and has an inseparable relationship with the life of the earth. In general, the light waves we can see with the naked eye (called visible light) are red, orange, yellow, green, blue, indigo, and purple, with wavelengths lying between 0.4 and 0.75 microns (µm). And beyond this range, light waves from 0.75-1000 micrometers (µm) that cannot be seen by the human eye (called invisible light) are infrared rays, consisting of near, middle and far infrared rays according to their wavelengths. “Far Infrared Rays”, the most beneficial to the human body, are made up of 4-14 micron (µm) light waves, which we call “growth light”. It has a close relationship with the growth of living things, because cells of biological organic species have water and polymer compounds as their main components. Growth light can activate water molecule groups as they shrink. This is because when its frequency matches that of the cell bodies consisting of vibrating molecules and atoms, resonance occurs, magnifying the magnitude of vibration. Hence the efficient transfer of energy which appears as activating tissue cells to make blood flow well, and promoting blood circulation. Benefits also include the acceleration of the supply of nutrients and enzymes to enhance metabolism and strengthen immunity, besides deodorizing, drying, dehumidifying, antibacterial, etc. Consequently, the effects on the cultivation of plants, and the associated changes in taste are very significant. 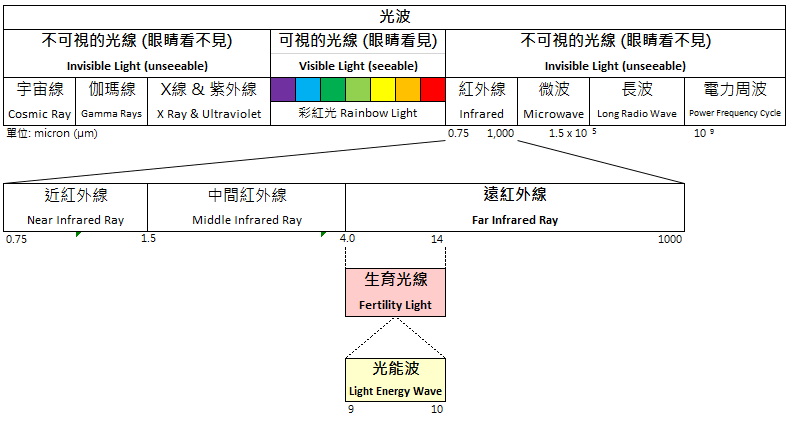 After far-infrared irradiation, the deformation ability of red blood cells can be increased, and the viscosity of blood reduced. It has a great effect on unblocking microvessels and improving blood flow.

Studies have shown that the body’s immune cells increase after exposure to far infrared rays. The number of white blood cells and the number of phagocytic cells such as lymphocytes also increased significantly. In addition, the immune cells in the skin have also been increased and activated, so that the skin has a better anti-inflammatory effect on bacterial infections. In animal experiments, after far-infrared irradiation, the number of T cells and B cells in animals was significantly increased, thus improving the immunity of animals undergoing experimentation .

Due to busy work, modern people often acquire symptoms of head, neck, waist and back pain. In Japan, this is called “overwork syndrome”, due to the over-accumulation of metabolites in body tissues. Medical research has found that after exposure to far infrared rays, the thermal and non-thermal effects of far infrared rays can be used to enhance the metabolic rate in the body. By increasing the enzyme activity in the body and increasing blood flow, the accumulated lactic acid, hydrogen ions and potassium ions can be decreased in tandem. Thus far infrared radiation has a therapeutic effect on this type of chronic disease.

6. Freeing us from worry and relieving stress

In the treatment of patients with heart dilatation, it was found that if the patient’s heart rate increases by 20 to 25 beats per minute, the body temperature would increase by one degree Celsius, thus increasing the patient’s metabolic rate so that the blood would not accumulate in the heart. This has a very good adjuvant treatment effect on patients with heart disease.

The cause of various diseases such as rheumatoid arthritis and ulcerative colitis is related to oxygen free radicals. Even heart disease, stroke, Alzheimer’s disease, etc. are all related to the increase of oxygen free radicals. The body itself has many antioxidant proteins, but the synthesis of these antioxidant proteins often decreases due to poor health. Therefore, it is necessary to coordinate treatment with the proper administration of antioxidants during the disease period in order to stamp out the effects of oxygen free radicals. These antioxidants include vitamins A, C, and E, as well as polyphenols and brass. Recent studies have also found that the simultaneous treatment of patients with far-infrared radiation can strengthen their body’s ability to combat oxidization and alleviate the symtoms.

Far infrared rays with a wavelength between 7 and 10 microns (µm) possess a “non-thermal” effect. Research suggests that the human body itself can emit far infrared rays with a wavelength of about 9 microns (µm), so that it can resonate with the human body to produce biological effects. Far-infrared radiation for 40 minutes a day can significantly reduce blood glucose in diabetic rats. In addition, it was found that after 15 minutes of far-infrared radiation, the cerebral blood flow of animals increased by about 80% and the degree of platelet aggregation was significantly reduced. Recent studies have also shown that patients with high blood pressure, low blood pressure, and hyperthyroidism, even patients with diabetes, have improved their symptoms after long-term exposure to far-infrared rays. Far-infrared rays are used for the adjuvant treatment of mold infections such as those found on the skin: Hong Kong feet, jock itch, and tinea capitis. Using far-infrared rays with drugs, it has been found that the effects of the drugs can be enhanced and the treatment period can be shortened. Far infrared radiation can also inhibit the growth rate of breast cancer cells in rats, alleviates the symtoms of hypertension, myocardial infarction, asthma, headache and epilepsy, etc.